Last night we agreed we’d go grocery shopping today.  And visit my elderly mother.  Early this morning before resolving to quit the downy lair an idea struck me as a further refinement of the project.  We could combine our grocery mission with breakfast at a local beanery. It had been weeks since we had exercised our summer tradition of going to the golf club for breakfast in the Village of Appleton overlooking the Mississippi River. Now that the clubhouse was closed for the season, the opportunity presented itself to re-enact the erstwhile weekend custom at a new venue.

The hash house I had in mind was one we had frequented only recently where I discovered to my epic delight a local take on the perfect grilled cheese sandwich (actually grilled bacon and cheese). My mother had spoiled me years ago with the unparalleled grilled cheese sandwich, slowly grilled so that brown circles appeared on the bread reflecting the subliminal coils of the stove, the cheese always runny and of course the ample use of butter which made the edges of the sandwich sinfully crisp.  As I lay in bed this morning, listening to the driving rain and howling wind outside and sensing the precipitous drop in the ambient temperature, the thought of a grilled bacon and cheese sandwich with two fried eggs “over easy” practically had me drooling. Small wonder at the conclusion of this reverie I leapt from the bed and bounced into the shower.  To horse! To horse!  Things to do on a frosty Saturday morning!

Though one is always tempted to reiterate a first-rate meal I shall spare the detail other than to assert its unqualified appeal. What is more worthy of repetition is the camaraderie of the place where we broke the fast. I knew even before we ventured inside that the restaurant would be busy and indeed it was. You see, immediately outside the restaurant were parked a number of half-ton trucks, the signature informant of an early-morning crowd especially at this time of year after the summer has gone and before the hunting season swings into top gear. The men of the Town congregate to communicate.  Nor was I mistaken.  Immediately upon prying ourselves through the windswept portal someone boastfully shouted, “You can’t come in here!”  Normally this taunting introduction would have been intimidating but I submitted to the gloss that we had trespassed upon the ritual pasture of the “regulars”.  Remember, this was not the golf clubhouse where we customarily perched on a Saturday morning.  Undeterred by the boldness of one of the congregation I quickly scanned the table of six and recognized the faces of the men, all prominent and well-known locals.  One of them generously mentioned an article I had recently written about automobiles (a favourite topic of mine) in the local e-newspaper.  This in turn invited gratuitous comments about my own vehicle which another (himself a committed member of the Ford family of fine cars) mistakenly identified as a Lincoln though I explained I had gone to the dark side and now drove a Cadillac. The robust patina of conversation invited ensuing diverging banter but before long we were seated at our own table and peering into the eyes of the welcoming waitress who arrived with black coffee, cheerfully ready to take our order. Our rehearsed order was duly rendered. We subsequently struck up a conversation with two new arrivals who sat adjacent to our table. The friendly exchange quickly transitioned into hotter topics including local municipal council and Donald J. Trump naturally.  We even settled the hitherto unspoken connection with the late Paschal O’Toole, a notorious Irishman who was formerly a residential tenant of mine and – more importantly – a friend of the Pope (but that’s a story for another time).

Even less enigmatic than a discussion of what we ate in the restaurant is the history of what we bought at the grocery store afterwards.  So I’ll skip that interlude entirely save only to mention a brief gossip in the aisles with the General Manager of the Mississippi River Power Corporation who reported to my dismay that the plant has been shut down since June due to the drought. This I know represents a significant financial loss, no doubt a punch in the gut of the Corporation.

Upon storing our groceries in the car we headed home to unload and then directed ourselves to Ottawa for a routine visit with my elderly mother. I honestly have nothing of import to add to that unvarying affair except that all is well. His Lordship afterwards brilliantly proposed that we drive to the Rideau Tennis Club to view the art installation on the new bridge extending across the Rideau River to Somerset Street East in Ottawa.  An acquaintance of ours received a commission to construct this singular work of art and I had been anxious for some time to see it up close.  Today was the day. 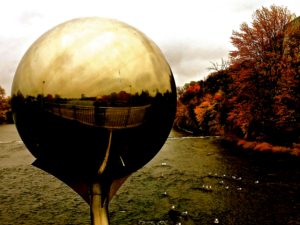 “A View from Two Sides” by Kenneth Emig

When we succeeded to extricate ourselves from our small rental car we bent into the blustery wind and lashing rain to traverse the bridge to view the object of enquiry. It is a superlative construction having a cleansing effect as a result of its imposing substance and compelling simplicity. It is things like this which transform a functional city into a human living space and lend a spiritual depth to the blunt and unadorned necessities of life.

Created by local artist Kenneth Emig, A View from Two Sides features two stainless steel reflective spheres, both 1.5 metres in diameter, situated at eye level on the observation areas of the bridge. The spheres present us with a panoramic view that includes the sky, river, shores, bridge, pedestrians and cyclists. The result is an unlimited variation of visual possibilities, providing the perfect place to pause and take in the natural beauty of the area. By looking into these spheres, we see ourselves immersed in the world around us. – Emig Research

Kenneth Emig lives in the Village of Clayton. 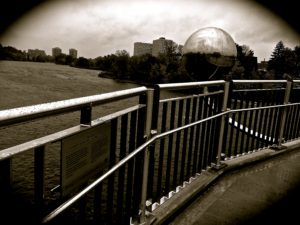