Sweat pants,  a silk scarf and heavy sweater were this morning the models in which I welcomed my first glimpse of autumn. Because I aimed to be out of the apartment before 9:00 am (in order to escape the arrival of the electrician) I was astonishingly on my bicycle at 8:40 am. The air was decidedly crisp and the sky was crystal clear. The purification was worth the struggle from the lair.

It pleases me to hear repeatedly on the news or television that people everywhere are becoming fed up with themselves during the pandemic.  The psychoses are at least universal and indiscriminate. The indignity of wearing a mask has long ago surpassed the plausibility of any constitutional right not to do so – the latest preposterous proclamation of a pitiable Trump supporter. The inescapable truth is that the entire planet is infected; and there is a very real probability that a good deal of the population will be wiped out. The plague has nothing whatever to do with politics or the constitution. Meanwhile we pretend to carry on as usual. But the threat preserves the isolation. And the distance. And the fear.

As a diversion from the pandemic it occasionally amuses me to consider the sum of my life in an instant. Such is the stark reality of quarantine and social distancing.  I am never able to capture the enthusiasm and energy which must have attended much of what I did as a youth – things like downhill skiing at Lake Louise in the Rocky mountains; or prolonged bike rides in the Gatineau Park; organizing a debating society at Devonshire House, University of Toronto; raising money for the Christian theatre company Creation 2 headed by Louis Capson and Gary Reeves; getting an education; practicing law; surviving whatever random episodes affect us all.

Suddenly we’ve arrived here – the present – the heightened pinnacle from which we clinically review the past and anticipate the future. The present is itself a synthesis of all that I have done or been. It naturally delights me to imagine that on February 24th next we shall be celebrating 25 years together.  It has been an alliance marked by a noble and caring friendship and remarkable discovery. We frequently quip that we have willingly endured a severe downsizing transition.  What remains of our booty are the precious articles which have always captured those essential ingredients making up our remaining material acquisitions. It is odd that the distillation is unaccompanied by alcohol – yet another accidental though welcome curiosity of old age.

It would be noticeably wrong of me to ignore the many instances of happiness which have insinuated me life. In a nutshell I never wanted for air, water, food or shelter. The relationships I’ve had have all been meaningful and rewarding. My family has always stood by me. I adore my friends. The last resort of my life is proving to have the characteristic ailments of old age but otherwise I count myself hugely successful for having made it this far, relatively undamaged. Admittedly I assess my primary battles with Nature – the so-called “cardiac events” to have been competitive but fair. Counting the open-heart surgery and my broken ribs/punctured lungs as two out of three, I reckon there remains one last encounter before I confess the end. 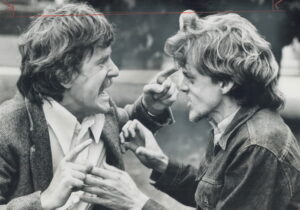