Today marked our departure from Hilton Head Island for the winter.  And perhaps forever. As much as we thrilled to the resort – and I shall never forget my awakening elation upon landing on the Island seven years ago – we’ll not likely return. Age and circumstances mitigate against a repeat. We’ve decided with what remains of our time on this earth we want to do something different. So after a restless night we got under way at five o’clock this morning, completing the packing, loading the car then dropping the apartment keys at the estate agent’s office.

Two days ago we had the car detailed to remove the pine sap and proliferate pollen which had accumulated in and upon the vehicle. The blue machine sailed beautifully down the manicured boulevards.   As we crossed the bridge to the mainland we cheered a heartfelt and admittedly wistful “Good-bye!”  then proceeded purposively to Interstate 95. We were officially on our journey home. We plan to take four days to cover the estimated 1,200 miles.  Our first stop en route was Cracker Barrel for breakfast. I had three eggs over-easy, double order of crisp bacon, double order of sausage patties and two biscuits. When the young waitress delivered the goods she mistakenly included with mine grits, sausage gravy, butter and jam, none of which I had ordered or wanted. Though it wasn’t wasted. The server shared with us her plodding efforts to train as a nurse. She has three jobs to help pay for her education and to maintain herself. She has no financial assistance from anyone and she lives in her own apartment . She joked about searching for a Sugar Daddy but she clearly intends to go it alone. I did what I could to encourage her short of writing a cheque.

I took a photo of His Lordship sitting in the restaurant and emailed it to my physician’s daughter in London, England to remind her of the value of humility. 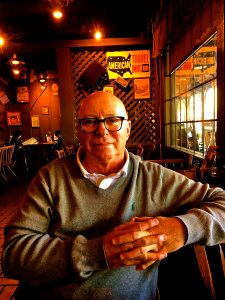 After a restoring breakfast we gabbed non-stop in the car as we rolled along the highway at between 70 – 85 mph zooming up and down the Blue Ridge Mountains. We wandered aimlessly in our conversation, touching on the past and the future, cementing our alliance with a good many in-house jokes and routine quips and knee-jerk silliness.

We arrived in Johnson City, TN around 3:00 pm. We’re staying at the Carnegie Hotel. We first filled the gas tank before checking into our suite.  At the hotel we got a parking spot at the front, repeating the same luck we’ve had on the two previous occasions here (in fact last time we had the identical spot as before). This sounds I know a small victory but there are never more than two or three spaces available as close to the Hotel entrance – just plain serendipity! More of what was to come. After unpacking our stuff in the suite we went to the business centre on the lower level.  It was a drawing room style with mahogany desks and serious office chairs. We printed our import declarations and signed them.  Then we peeked outside on the garden patio.  The pool wasn’t yet open for the season but the lounge chairs were set up for sunbathing. I pulled up a cushioned chair with matching footstool and dozed in the sun for twenty minutes. 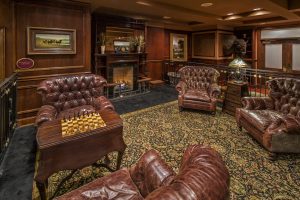 Afterwards back at the suite we made a strong cup of coffee, relaxed and watched TV. At six o’clock we headed to the trough in the main dining room.  We had the same server as last November – Sam. Turns out he is a musician, mostly a singer.  He has three albums on the Internet. The food – most of which Sam recommended – was superb! Homemade white bean soup to start, pear salad and candied pecans with goat’s milk cheese followed by seared salmon with rice and haricots. In-house cheesecake for the sweet. Nonpareil!

Over dinner we agreed we had had a good day, another good day in our fortunate saunter through life. Tomorrow it’s 300 miles north to Harrisonburg, VA through the Shenandoah Valley.

Talk about serendipity!  When we checked into Hampton Inn in Harrisonburg, VA we had the same room number 401 as our suite last night at the Carnegie. But there the comparison ends. What however redeems the otherwise exceeding modesty of Hampton Inn is the free breakfast – and not because it’s free. There’s a great choice of fruit, breads and protein. Besides we get breakfast out of the way before having to travel too far down the road.

Our drive today was uneventful, breakfast as usual at Cracker Barrel. Great scenery through the Shenandoah Valley. In Harrisonburg we gassed up the car and put it through a wash just down the road from the hotel before checking in. Once at the hotel we dropped into the main floor lounge and drank a coffee while watching Sean Spicer bark like a nursery school teacher at the submissive media reps. To think that a discussion of world affairs has descended to such an ignominious low!

We wandered outside to check the pool. The gate was locked.  But nearby in the blazing sun there was a large solitary picnic table spread upon a circle of small river stones designed as a park-like setting. I decided to sit there to absorb the rays. It was an uncomfortable perch. The grey sun bleached picnic table was durable but unforgiving. I shifted my weight trying to maximize my exposure while attempting to resist the rock hard surfaces of the weather beaten picnic table. As I stared into the white sun I heard a vehicle approach on the adjacent service road. I opened my eyes and saw a middle aged worker step out of the cab. He was unshaven, clad in a baseball cap, blue jeans and a singularly unbecoming muscle T-shirt. He supported himself on a crutch. As he approached in my direction he said hello and told me this was where he had broken his back.  I instinctively knew enough to express my surprise and tell him I understood why he was upset. I wondered to myself whether he had fallen from a ladder. He and his sidekick strode into the hotel.  Later the sidekick and the chap who I had earlier seen painting the elevators emerged carrying what I initially thought was a large coffee maker. They put it into the back of the truck. I went back to my impossible sun bathing. Again the men emerged from the hotel with what I discovered were small refrigerators. Apparently several of them either needed repair or were being junked. A female manager of the hotel joined the throng of workers standing by the hotel door. They obviously knew one another. They joked and laughed together. When the party broke up the man with the crutch headed back to the truck to check the contents in the back and to close the rear folding gate. As he struggled to get into the driver’s seat he called out to me, “Have you got any Indian blood in you?” I replied, “I am a hopeless sun worshipper! I need the Vitamin D!”  He didn’t care what I had said. He said, “My grandmother was part Indian”. I answered, “There’s a good chance I am too” to which he replied, drawing his hand down his face, “You even have the features, you can see it”. We didn’t have enough time for me to explain that my mother was a fifth generation French Canadian and that we all knew what the French and the Indians had done, that there was a very good chance of a genetic throw-back in my blood, that I was proud of my possible lineage.  All I had time to say – as he mentioned his broken back again and the need for a third surgery- was that I wished him luck. He drove away, leaving me shifting on the rude plank, thinking how much I enjoyed talking normal to normal people about normal things.  The tradesman had no interest in my being a sixth generation Canadian descendant of British stock or that I was a lawyer or what I drove or how I lived. Nor more importantly did I feel any need to tell him.

Just when you’d think things couldn’t get any better, picture our delight to locate an International House of Pancakes a spit from here! Life’s bounty is seemingly endless! And “Catch Me If You Can” is playing on the TV.

Everyone has heard how things come in threes. This morning we began our day earlier than usual.  We had checked out of the hotel before 5:30 am and were just leaving the “restricted access” area (as our GPS girl calls it), about to make our first turn onto a major highway to get back onto Interstate 81 North, when I suddenly realized I was traveling down a 4-lane highway in the wrong direction!  I first saw the large white painted arrows on the road pointing towards me.  A solitary driver coming the opposite direction towards me honked his horn but I was already indicating a left turn to make a U-turn to go back to where I had come.  Thankfully there was no other traffic and my compensating adjustment went off without a hitch.

As soon as we filtered onto Interstate 81 I thought to myself, “Wonder what the next two unexpected events will be?”

It didn’t take long for things to materialize.  Shortly afterwards at a rest stop his Lordship opened the rear door of the car to get something and one of the bags tumbled onto the ground.  My concern was compounded because it was so dark outside; I worried that something – anything – may have fallen out of the car onto the ground but went under the car where we couldn’t see it.  Apparently not, though I didn’t really check to the point of getting on my hands and knees to examine the undercarriage.

The final element of the trilogy of unanticipated things wasn’t long in developing.  His Lordship reported that he had received an email from our primary banker that his credit card had been compromised.  A quick check of the on-line balance of the account confirmed there were indeed two suspicious charges by what we subsequently determined was a discount store in New Orleans.  A call to the bank confirmed the details and the card was immediately canceled.  A new one will be mailed.

Unlike the previous two days of our journey the weather was not stellar.  When we stopped for our routine breakfast at another Cracker Barrel it began to rain.  The grey skies, drizzle and bare tree branches (no buds in the Northeast as yet) gave a forlorn appearance. What however absorbed us was that because we had started our day so early we would be at the next hotel before noon.  After a moment’s debate we called ahead and were able to cancel the reservation without penalty. We changed the GPS coordinates and motored north.

When I saw a sign “Lake Ontario Water Shed” I was instantly uplifted.  By that time we had sailed through Virginia, West Virginia, Maryland and Pennsylvania and were then in up-state New York.

We crossed the border after having endured some unnecessarily abrupt treatment from a Canada Border Guard.  We willingly paid some duty.

Just shy of our own garage we stopped for a quick bite in Carleton Place and then spent the remainder of the evening settling back into our apartment.  It was good to be home!

Going up the country