If any one of us knew with certainty that we we were related to some of the Kings and Lords of England in the 17th century we’d be ashamed to admit it. The British long ago surpassed any horror of capital punishment which is now current among educated people throughout the globe. Public executions were common; sometimes the gibbet was mounted on the street before the victim’s home. The further disgrace is the utter inadequacy of the legal system both then and now to impose liability for even disgraceful conduct. The passion for vengeful death is all too familiar to this day. Time and again it has proven to be an ill-founded objective and one guaranteed to rebound. Why I wonder are humans the only ones among the animal kingdom to behave so poorly – especially when it is evident time and again that no one of us is spared either the obloquy or the indignity.

Some of them had been hanged: more should be hanged: and the rest should be sent to the plantations.

Excerpt From
Thomas Babington Macaulay Macaulay
“The History of England, from the Accession of James II — Volume 1.”

Elizabeth Gaunt (died 23 October 1685) was an English woman sentenced to death for treason after having been convicted for involvement in the Rye House Plot. She was the last woman executed for a political crime in England.

Gaunt was an Anabaptist shop-keeper in London. She and her husband William lived in the parish of St Mary, Whitechapel. They were involved in Whig politics. She was the daughter of Anthony Fothergill of Brownber, Ravenstonedale, and was well known to give shelter to persecuted people, such as victims of religious and political oppression. According to Bishop Burnet, she spent “her life in acts of charity, visiting the gaols and looking after the poor of what persuasion soever they were”. She helped one of the participants of the failed Rye House Plot of 1683, James Burton, to escape to Amsterdam. After his arrest in 1685, Burton implicated her as an accomplice in the hope of saving his life. She was in fact not involved in the conspiracy and the trial against her was seen as a show trial. David Hume wrote, “He received a pardon as a recompense for his treachery and she was burnt alive for her charity.” She was sentenced to death for treason in the Old Bailey on 19 October 1685.

Gaunt considered the trial to be a martyrdom and reportedly behaved with such good humour that the audience was moved to tears. She was executed by burning, and, as she was denied strangulation, she was literally burned alive. William Penn witnessed the execution and reported that she “died with a constancy, even to a cheerfulness, that struck all that saw it.

The only thing that preserves the amusement of historic blood-thirstiness is distance.  To overcome the barrier of time we are accustomed to honour our so-called “war heroes” for example with acts of defiance and purpose. Again I have to ask, Who’s idea was this? One can only assume that the war machine is a huge operation having a multitude of accomplices. Where in the process is the privilege to take another life? And if we did indeed exercise that questionable privilege upon the mystical belief that it was a good idea, What in the end is achieved by removing the sad corpse from the future? Surely there could have been achieved a better solution without the inutility of killing people. We needn’t point fingers at the American horrors of Vietnam and Afghanistan. The lingering memories of both WWI and WWII – whether in music, theatre, film or familial connection – are vivid reminders of the utter stupidity of war no matter how romantically or historically portrayed.

Nonetheless we once again have overlooked the indescribable value of human life. I foolishly no doubt cling to the idea that any argument can be resolved.  My preference is strengthened by my conviction that, if the object is universal agreement, I see no reason why any argument cannot be settled upon those terms. We patently have it within our capacity to resolve our differences; compromise is as real as any other ingredient of an agreement.  Time and again we have proven that war or planned executions are not the answer. In fact they may be the problem. They are in any event a problem for me. 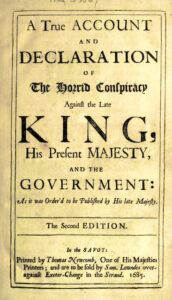 The Rye House Plot of 1683 was a plan to assassinate King Charles II of England and his brother (and heir to the throne) James, Duke of York. The royal party went from Westminster to Newmarket to see horse races and were expected to make the return journey on 1 April 1683, but because there was a major fire in Newmarket on 22 March (which destroyed half the town), the races were cancelled, and the King and the Duke returned to London early. As a result, the planned attack never took place.

Historians vary in their assessment of the degree to which details of the conspiracy were finalised. Whatever the state of the assassination plot, plans to mount a rebellion against the Stuart monarchy were being entertained by some opposition leaders in England. The government cracked down hard on those in a series of state trials, accompanied with repressive measures and widespread searches for arms. The Plot presaged, and may have hastened, the rebellions of 1685, the Monmouth Rebellion and Argyll’s Rising.

I hesitate to broach this controversial and dreadful subject because I have always wondered what was going through my late father’s head over the North Atlantic in the Second World War as he careered the Hudson bomber towards the German U-boat and fired.  Naturally the Germans fired back and ended downing the bomber into the sea where the flight crew bobbed for nine hours before several died and the remainder were rescued. Not a pretty picture overall by any account.  And what were the German boys thinking before they gulped their last breath? Were they so absorbed in the current political ambitions of their mad General that they willingly proffered their lives? There is always an answer to the question, Why are we trying to kill others? But seldom is the question asked, “How can we settle this before we end up killing ourselves?”

The currency of this debate has lately arisen from the incalculably tragic sight of people in Afghanistan clinging to planes to escape the war zone.  It matters not in my opinion that the reigning authorities are reacting so miserably.  There is no need to establish the grounds for provocation or for any rebuttal to it. The labour of war for the past twenty years has already revealed the result of perpetual antagonism.