Although not a singular occurrence it isn’t often I’d compare dining out with going to the circus. This evening’s nosh at Les Fougères in Tenaga, Quebec in the Gatineau Hills near Chelsea promises to be just that; viz., an amusing assortment of rides! One of our team in particular is notorious for atmospheric conduct. I take strictly an observer’s opinion without contaminating the performance as somehow personal or embarrassing.  My interest is more clinical, perhaps extending to the realm of artistic content. Whatever the characterization of the evening I am certain it will inspire both mirth and wit. 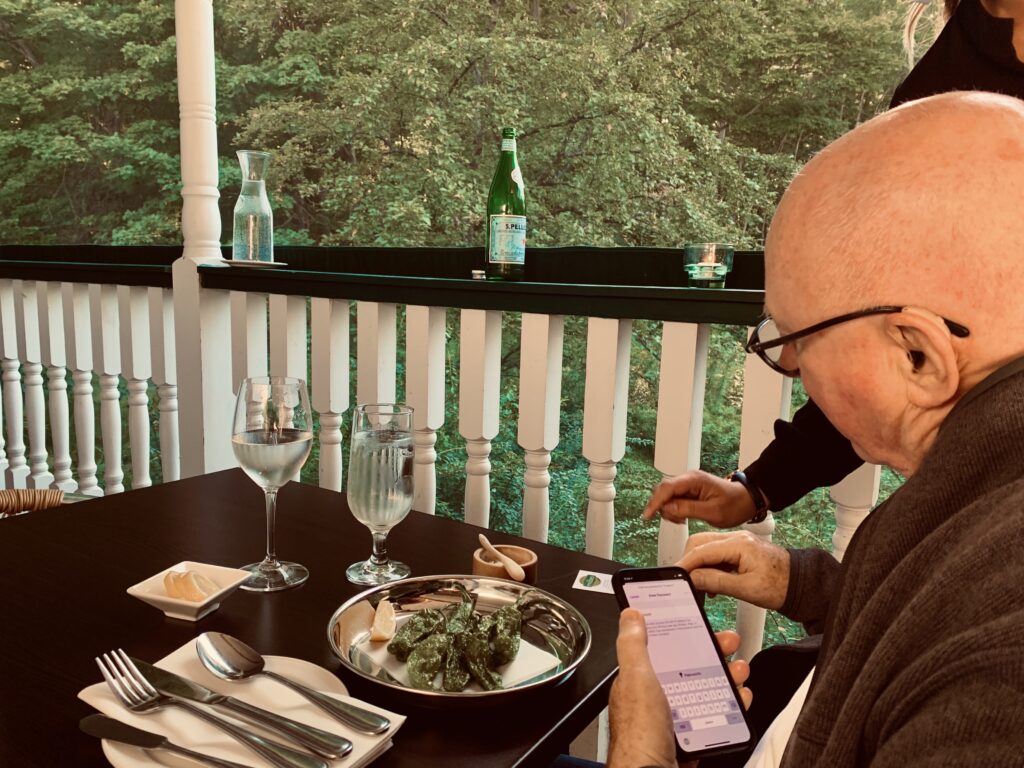 Unquestionably the salient feature of the pleasant summer evening turned out to be our meal. The exploit was in line with the late afternoon dining custom of the elderly but as always it ensured a ready table and an attentive staff.  Indeed our waitress and her busboy assistants were universally enthusiastic and well informed aside from being refreshingly youthful. As I expressed at one point the food was the Sacrament of Heaven! One course in particular – my main dish of veal sweetbreads and Chanterelle mushrooms with a decidedly complex sauce – was so captivating that I honestly lost track of my conversation with my companion upon taking my first bite.  It was exquisite beyond belief!

Infused with such tasty gastronomic propulsion we undertook our putative table talk which I don’t mind saying was riddled with innuendo and purpose, two razor edged elements which I find routinely animate dialogue. The Ottawa contingent as usual proved himself an historic raconteur and an inveterate stimulant. His combined intellect and visceral expressions provoked as always both scintillating and at times heated conversation. Not surprisingly a healthy portion of our confab surrounded American politics in general and the upcoming presidential election in particular.  It must be a source of unspoken delight for Americans to note the international curiosity with US affairs. Nor have I any doubt that the primary reason for the absorption is not just because America is the self-proclaimed greatest nation in the world but that Donald J. Trump is an astonishing – though often regretful – clown on the world’s stage. As much as I attempt to enlarge my understanding of politics and different groups of people (I confess I am now recalling Hilary Clinton’s “Deplorables“) I am less successful at excusing Trump’s constant narcissism and poor language. His entire bearing disturbs me. Most Americans whom I have met feel similarly disposed – though not without exception.  Naturally the bona fides of the Trumpists are not always in dispute; but in any event I reckon there is the need for some discussion. Polarized opinions seldom survive.

At table we diverted our tarsome political murmurs with shared recollections which included having lunched years ago when it was still open at Le Neuvième restaurant at Eaton’s in Montreal on Sherbrooke St W. We discovered having chosen the same repast – martinis and chicken pot pie! What persisted and survived the rendezvous was the happiness at renewing acquaintances and admitting the necessity to savour the moment! It helped to know the Lincoln Project (a hub of disgruntled Republicans) was daily growing in its influence and scope.