Earlier today when contemplating my evening amusement of writing I pondered a suitable title for the post.  The inexpressible and unwitting Nirvana of the moment drew me to such words as “legitimacy” or other expressions characterizing a sense of clearance from the heat of embargo. I settled upon “sanction” as the most apt distinction. Strangely sanction is either punishment or approbation. Either way it involves chastising or applause of one degree or another. The meaning which arose in my mind on this sunny day as I soared down Hwy #416 to Burritts Rapids was that of accreditation. Inexplicably I was consumed by  a transcendent state of peace and serenity. It was as though my inner mechanism had been transformed to an ideal free from anguish.

Shamefully I confess a not insignificant portion of my former dissolution surrounded my current domestic concerns. Primarily I speak of my truck/van as my insurers are wont to label it. Considering the extent of my vehicular travel it is evident that mechanical niceties are not entirely lost on me.  Without threatening to jinks the outcome I can at least report that we are making advances in the automotive theme. I chanced to speak on the telephone at some length with David Cameron, General Manager, Lincoln Heights Ford Motor Sales.

“At Lincoln Heights Ford, we exceed customer expectations regarding all things automotive in Ottawa and the surrounding region!“

We are reviewing what if anything Lincoln Motor Company can do to address the latest kerfuffle we’ve had to endure concerning polluted condensation from the undercarriage of the automobile. The notable feature of the new car is not so much its contamination as its superlative performance on every other level. Unquestionably the car is one of the most pleasant I have ever driven.

Punctuating this pleasing evolution was my chance discovery of the locks on the Rideau Canal at Burritts Rapids near Merrickville.

“In 1793, Stephen and Daniel Burritt, from Arlington, Vermont, settled in the vicinity of the area now known as Burritt’s Rapids. A plaque was erected by the Ontario Archaeological and Historic Sites Board commemorating the founding of Burritt’s Rapids.

By 1812, Burritts Rapids had become a bustling hamlet. At the peak of its prosperity, it had telegraphic and daily mail, 2 general stores, a bakery, a millinery shop, 2 shoe shops, a tin and stove store, a grist mill, a woolen mill, a tannery, 3 blacksmith shops, 3 wagon shops, a cabinet shop, 2 churches, 2 schools, 2 hotels, a bank and an Orange Lodge.

The hamlet’s natural advantages as a transportation centre were enhanced by the opening of the Rideau Canal in 1831. Burritts Rapids was the site of the first bridge across the Rideau River. A post office was opened in 1839.

By 1866, Burritts Rapids was a village with a population of about 400 on the Rideau canal, in the townships of Oxford and Marlborough, and counties of Carleton and Grenville. It had two schools, and citizens were in the lumber business.“

Though Burritts Rapids is uncommonly convenient it is nonetheless among the Ottawa Valley’s hidden treasures.  My inadvertent access to the place was the product of deliberation; namely, avoiding the more popular roads and choosing instead to investigate the narrower twists and turns following the corridors of leafy trees and bucolic farms. Such is the nutrition of old age! 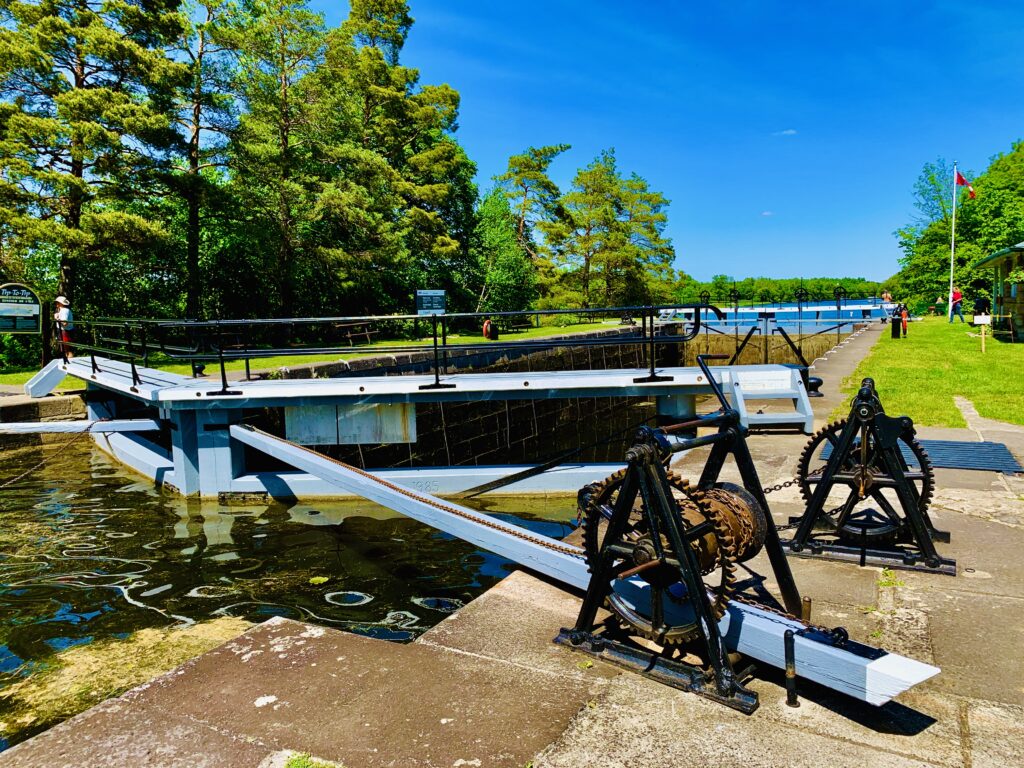 The accessibility and simple charm of the park immediately suggested to me the innocent delight of a picnic.  There are at least two picnic tables on the grassy knolls overlooking the Rideau Canal. In one of two benches in the park I sat next to the water sunning myself for a moment. It was sublime! My instinctive caution regarding the mercurial rapture of obsessive personality made me question the sentimental expression. Yet this psychological display is tempered by my equally repetitive buoyancy. Though my behaviour is at times subject to tedious analysis which others find off-putting, when the occasion for useful settlement arises I pride myself upon being able to digest the facts and realities.

If one purports to seek resolution then accommodation is part of the process. It helps as well to have a magical summer day stimulated by “a clean windshield and a full tank of gas” as the late Hughie Witten – God bless his soul! – once so regularly observed. My personal ambitions and entertainment have similarly reduced to the absence of adornment. This reduction pervades my entirety! Direct and axiomatic thinking has become my mantra.