As shameful as it may resonate I can’t think of much that is irreplaceable. In fact I pride myself on having let go of about 90% of what I spent a lifetime acquiring – and having subsequently swapped it quite happily for something else. Once I resolved to retire I posited it wisest to down-size in a major way. As my late father frequently observed, “You can’t have money and things”. It is possible to assert that what I had was not worth keeping; but even if that were true – which I contend it is not – the remark doesn’t contaminate the thesis that there is always something else to fill the gap. And guess what, I found a substitute.  No trouble.

The adage about shifting attention apparently has an ancient origin:

In 1781, Dashwood’s nephew Joseph Alderson (an undergraduate at Brasenose College, Oxford) founded the Phoenix Society (later known as the Phoenix Common Room), but it was only in 1786 that the small gathering of friends asserted themselves as a recognised institution. The Phoenix was established in honour of Sir Francis, who died in 1781, as a symbolic rising from the ashes of Dashwood’s earlier institution. To this day, the dining society abides by many of its predecessor’s tenets. Its motto uno avulso non deficit alter (when one is torn away another succeeds) is from the sixth book of Virgil’s Aeneid and refers to the practice of establishing the continuity of the society through a process of constant renewal of its graduate and undergraduate members.

The slogan has since been employed by many others including the Hellfire Club (for men of letters and drunks), the Kingdom of Austria, a bronze by Edme Antony Paul Noël (1845–1909), 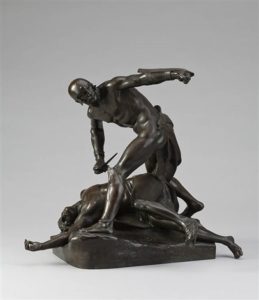 the Old Testament, a general political sense (“remove that man and you have his like for a successor”), funerals (“the flourishing of descendants”), and a theory of art. 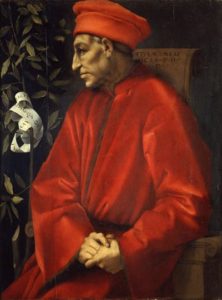 “As one is torn away another appears” declares a mysterious scroll in this stunning portrait of Cosimo de’ Medici the Elder, painted by Jacopo Pontormo around 1518, many decades after Cosimo’s death (1464). Quoting Virgil’s Aeneid: Uno avulso non deficit alter Pontormo codes messages of reincarnation in plain sight. Look at the hands – they are clasped to replicate the symbol of infinity visually rhyming with the elaborate knot of the scroll.

It is not just Orpheus or Hercules who can transcend the boundary between life and death with their famous descent to underworld and return to the living, it is the very nature of ART!

In even the most mundane encounters of life the possibility of renewal abounds.  It isn’t just replacement. There is a freshness about the inevitable cycle.  If one were to resist the activity there is a very real risk of lost opportunity. No doubt it is the understanding and acceptance of that philosophy which enables our heroes and winners to rise from the ashes. In an odd way that I could never possibly explain the constant change of life is for me the only perfection. The moment something becomes static it diminishes. It does not matter how grand or precious a thing may be, how elevated its position, how sanctified its authority – there’s always another in the wings.

I have to confess that I adopt this scheme more as an agenda for inventory than as a prescription for human relationships for example. If however one insists upon uniformity in these abstract matters it may suffice to argue that in the context of personal alliances one must be alive to discovery in others. This may awaken the requisite succession of thought to buoy the rejuvenation.