When I moved to the country 46 years ago in June of 1976 at 27 years of age I hadn’t a clue what would transpire. The paramount theme – and frankly my only focus at the time – was withdrawal from the city where I had had a useful but moderately distasteful experience and as a result fallen out of sorts with urbanity generally. It soon became apparent however that I was in my element in a rural environment. 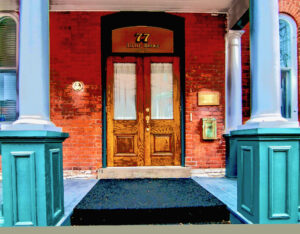 Not everyone is stock for the country; not everyone wants to live in the country.  Indeed it was common to hear people in the city ask me, “So when are you coming back to the city?” There was an unmistakeable insinuation of distress in the country. I admit that some people are better suited for Country Mouse than City Mouse. It was instantly clear to me upon my arrival in Almonte that I had found my niche.

Part of my amusement upon switching from urban to rural was to understand why others had done so. Real estate was the undeniable attraction. There were some who sought acreage – the country gentleman who retires with his book and his bottle.  Others found an historic stone mansion in a quiet and secluded area of town. Some of us may have assumed a wild west attitude to discovery by moving away from the perpetual constraints of the city.

It was reminiscent of my Nova Scotian experience at law school several years before that everyone knew one another. The social boundaries observed in the city were unfamiliar in the country where people regularly congregated together uninterrupted by any restriction of education, profession, age or residence. Certainly respect was preserved for those who were entitled to it by virtue of their office or other contribution to the community; but otherwise the community flowed together unhindered.

Yes, there were the inevitable cocktail circuits in Town. Some of those associations were driven primarily by traditional degrees of social standing; others by politics; some by hobbies (whether gardening, lawn bowling or hunting). But there were no rules or expectations which governed confederacy. There was a universal expectation of accountability; that is, say your piece and get on with it.

The other common truth of country living is that there are no secrets. I wasn’t in Town a month before I had heard about all the social dirt, sexual improprieties, matrimonial eruptions and ancestral glories. The identical clarity naturally applied to me. As I liked to quip, “No one suspects – they know!” But it was a case of everyone living in a glass house so no one threw any rocks. We all learned to keep closed lipped when approaching our respective prickly topics.  It wasn’t a question of irreverence or illegitimacy; we simply made everybody’s business nobody’s business.