Many factors combined today to make for a perfectly splendid summer day! The broad outline of my day was a trip to Manotick to meet with my Hair Architect (Warren), then a pleasant visit to my mother at her retirement residence, followed by a late afternoon bicycle ride and the exceeding pleasure of the fine weather and blossoming lilac bushes.

To fill in some of the detail, Warren advised that he considered it premature to cut my mop since he hadn’t finished “shaping” the look.  This pleased me.  Although I have been tempted more than once lately to abandon my once burgeoning ambition for “long hair” – and to admit that the undertaking was preposterous – I nonetheless continue to harbour sufficient enthusiasm about the project to linger in hopes of improvement.  Warren is making slow but barely noticeable amendment. It has taken me almost a full year to get my head of hair to this length, interrupted by hiccup stops and starts with at least two other schemes (each a product of two other stylists). I am constantly reminded in this personal obsession that the reference to a bad or good hair day is not without substance.  When it comes to hair we are hopeless slaves to media advertisement which of course distorts any possible realistic view of the subject. It is safer to recall that even those who on some days appear to have the perfect “do” may on others look as dishevelled as any other. Beauty is as much an accident in life as anything else.

When I left Warren, I headed northwest from Manotick along Limebank Road, a former rural by-way which is now a highly developed four-lane highway into the City of Ottawa on the east side of the Rideau River. The southern end of the highway is flanked by modern developments, shopping centres and beehive dwellings. The pristine nature of the highway is nonetheless pleasant because it is so smooth. The ambient temperature had risen well above 25℃ so I put down all four windows and enjoyed the wind in my hair.

It was about 11:30 am when I arrived at my mother’s apartment.  An Assistant was there helping my mother to get dressed. I removed myself to the sitting area and put on a CD of the Palm Court Theatre Orchestra which elevated the tone of the late morning. As the Assistant was leaving I gathered from her more current information about my mother’s condition.  My sister arrived moments later and she and I accompanied my faltering mother on her walker to the dining room for lunch. Initially my mother expressed she was feeling too unwell to stay in the dining room but once she settled into her chair at table she appeared to revive.  When the server Margaret arrived with the soup course my mother objected that she wanted nothing to eat but Margaret knowingly placed the dish in front of her and my mother immediately began to consume it.  At intervals I noticed my mother looking distractedly about her as though she were disconnected with the scene. My mother was scheduled to have her hair and nails done after lunch.

Before leaving the retirement residence I played the grand piano in the front lobby.  There are a number of “regulars” (including staff) who always listen to my playing and who are always favourable to it even though I readily admit they’re hearing the same four pieces as before. Not having my own piano any longer (and not having unpacked my electronic keyboard at the apartment) I make a point of playing the piano at the retirement residence frequently.

On my way home I stopped as usual at the car wash in Bells Corners to fill up the tank of the car and to put it through the wash.  I dipped into the station kiosk to buy a bottle of water (instead of a coffee) and ended chatting with the attendant with whom I have quipped in the past.  We got onto the subject of Donald Trump and to my surprise he is an avid supporter. He is clearly of East Indian descent (and he still has a lingering accent) but he is obviously as up to speed with local politics as anyone else. He readily expanded his views upon American politics generally to cover Hilary Clinton, Bernie Sanders and American involvement in Afghanistan, Pakistan and Northern Africa. It was clear that he and I could have continued discussing the matter at greater length but we were disturbed in our endeavour by another customer.

As soon as I reached home I determined to go for a bicycle ride. The weather was superlative, warm (without being sultry), dry, cool wind, and the blossoms on the lilac bushes were at their peak.  My progress was intercepted by no less than three people, my former legal assistant, a family friend and a former client.  Everyone was pleased to be out-of-doors on such a spectacular day. Gossip abounded in each of my congresses and it was with some determination that I tore myself from my last encounter to regain the benefit of my bicycling.  I  also stopped on several occasions to photograph the blossoms and rural views.

Because my lower back has been stiff of late I decided to shorten my routine bicycle ride.  I just cycled to the end of Country Street then back. 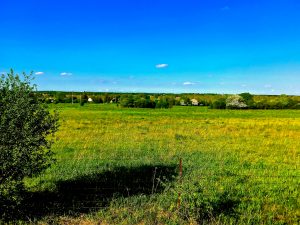 Today was a reminder of the many advantages of living in this bucolic community. I really can’t imagine a more perfect place to spend the summer. One never feels smothered by urbanity here in spite of its convenience and stunning surroundings. The soft, warm air was blissful! 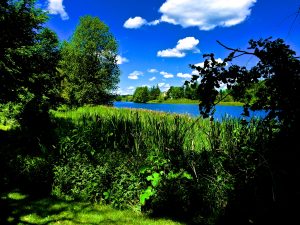